On July 4, 1804, Lewis and Clark’s Corps of Discovery was camped on the site of a Kanza (Kaw) village near the mouth of the Kansas River. They had been told of the proud warriors who inhabited this area, but did not encounter the tribe, who were hunting buffalo in the western part of present-day Kansas.

The Kaw Nation derived its name from the Siouan aca, “south wind,” a reference to the tribe’s role in war ceremonials, using the power of the wind when recognizing warriors. Among the many variations of the name given by French traders and other Europeans were “Kanza” or “Kansa.” By the mid-18th century, the “Wind People” were the predominant tribe in what became the state to which they gave their name (Kansas). Their territory extended over most of present-day northern and eastern Kansas, with hunting grounds extending far to the west.

The Lewis and Clark expedition had a profound effect upon the Kaw. As people learned about the desirable lands along the Missouri and Kansas Rivers, the Kaws presented a formidable obstacle to westward expansion. Their warriors maintained control of the lower Kansas valley against both the white man from the east and alien tribes from the west. A succession of treaties sought to change the Kaw from an independent, semi-sedentary people into individual family farmers on the model of white agricultural society. The results were devastating to the tribe.

The treaty of 1825 reduced the tribe’s 20 million-acre domain to a 30-mile wide 2 million-acre reservation beginning just west of future Topeka. Promised annuities were seldom delivered or were obligated to unscrupulous traders, while disease decimated the tribal population. When railroad, town and land speculators coveted the 1825 treaty lands, the Treaty of 1846 further reduced Kaw territory to 256,000 acres at present-day Council Grove. The subsequent Treaty of 1859 removed the town of Council Grove from Kaw lands and gave the tribe only 80,000 of the poorest acres, sub-divided into 40-acre plots for each family.

Finally, on May 27, 1872, over the strong protests of Chief Allegawaho and his people, a federal act moved the Kanza to a 100,137-acre site in northern Kay County, Oklahoma.

From a population of several thousand, the Kaw had declined through disease and starvation to 1,500 by 1800, to 553 by 1872, and to 194 within 16 years of the move to Oklahoma’s Indian Territory. Even here their land claim was not safe. The Kaw Allotment Act of 1902 legally obliterated the tribe until federal reorganization in 1959. Their former reservation land was inundated in the mid-1960s by the construction of Kaw Reservoir. This required the relocation of the tribal Council House and tribal cemetery.

The Kaw Nation of Oklahoma has survived adversity and today is a federally-recognized self-governing tribe of 3,723 members. Administrative headquarters are in a four-building complex in Kaw City, Okla. Tribal Enterprises include the Braman, Okla., Travel Plaza properties at Interstate 35 and Highway 177, Rock and Brews Casino Braman, an experimental pecan tree farm at Washunga Bay, and Discount Tobacco Shops at Ponca City and Newkirk. Tribal Enterprises also include Woodridge Market in Ponca City.

As the Kaw Nation progresses economically, it also seeks to recover its cultural heritage. The Kaw language, almost lost with the death of the last of the full-bloods, is being revived through lessons beginning with elementary school children and includes weekly conversational lessons for adults and children available in person at our Kaw City headquarters.

The site of the last Kaw village in Kansas, Little John Creek Reserve, is 3-1/2 miles south of Council Grove. It has been placed on the National Register of Historic Places and is being restored as Allegawaho Memorial Heritage Park to tell the story of the Kanza. Plans include stabilization of the existing ruins, interpretative signs and audio posts, two miles of walking trails, and an eventual visitor center.

The Kaw Nation sponsors a Powwow during Council Grove’s annual Washunga Days in June. The Kaw Nation’s Annual Oklahoma Powwow is held at Washunga Bay the first weekend in October. Visitors are welcome at both events. 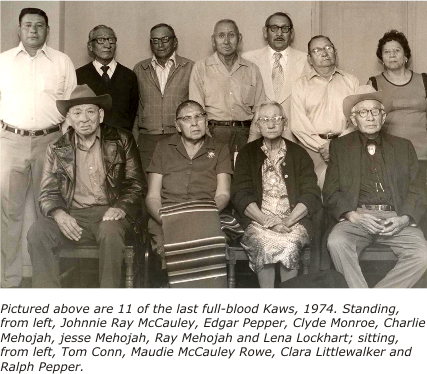